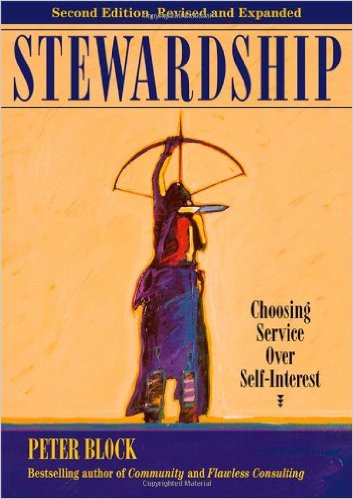 Although first published in 1993, the second edition, published a couple of years ago shows how relevant the concept of stewardship remains in this complex and ever-changing world of leadership that we work in. It addresses the distribution of power, purpose and rewards within the workplace and the need to do this has become increasingly relevant as we move away from traditional hierarchical structures to more distributed ones that unleash creativity. The culture change the many organisations are seeking will only be cosmetic without addressing these core issues.

It’s a well-structured book that talks us through the theory, the actions that are needed and then some logical steps to get there. It ends by exploring the wider impact on society that this approach might have and fits therefore neatly into the fort and groups model of leadership addressing all four elements; the personal, the team, the organisational and society at large. I also like the way the book is laid out; the pages broken up with interesting quotes and sidebars and navigation is made easier by some side titles; all very useful to avoid the book getting bogged down in being just another textbook.

When I talk to the boardrooms of organisations we work with and I ask them what outcomes are they looking for from the work we do; how will they know the change program has been successful? I almost always get some variation on the same theme; they want people to take more ownership and more responsibility wherever they are in the organisation. What I like about the principle of stewardship is that at its heart it is about creating organisations where this principle is embedded. It’s all about relationships, but relationships that are built through partnership not hierarchy; based on empowerment not dependency. Peter Block talks about the distinction between partnership and patriarchy.

One of the things that I like about the book is it isn’t just theory; Peter gives a range of different solutions to restructuring and organisation to fit in with the concept of stewardship. I particularly enjoyed the chapter on reward systems that support stewardship. The author starts by challenging and debunking many of the traditional ways that we look to reward people. He talks about the process of ranking people and makes the well judged comment that this is literally a means of keeping people in line. When talking about pay for performance he says that actually a more accurate description based on the fact that it is our boss who evaluates is pay for compliance. So the structure of our reward system has to reflect the kind of organisation we are trying to create. One approach would be to give the people in the organisation the power to decide their own pay system - covering everybody from the top to the bottom.

More posts from author
Tuesday, 19 May 2020 The Strengths Focussed Guide to Leadership by Mike Roarty and Kathy Toogood
Thursday, 14 May 2020 Stewardship - Peter Block
Monday, 11 May 2020 Better Under Pressure - Justin Menkes
Wednesday, 06 May 2020 From the Ashes to the Summit - Juan Carlos Mejia
Wednesday, 01 April 2020 Living Every Second - Tracey Edwards